The Women’s Presence in Israeli Architecture exhibition was held in Jaffa’s Architect House in February 2007. It shed a new light, first of its kind, on the work of Israeli women architects. At its core was the argument that women’s planning is a substantial part of contemporary high-level Israeli architecture. The exhibition featured noteworthy projects of various scopes and scales that continually enhance the city’s private and public spaces. The architects featured in the Women’s Presence catalogue, and members of the exhibition’s steering committee, are all recognized architects who made major contributions to Israeli architecture. Some have won professional contests, and some combine their professional careers with teaching or activism.

The exhibition’s history somewhat reflects the emergence of gender awareness in Israeli architectural discourse. It was initiated by former Tel-Aviv city architect Sergio Lerman (currently Ramat-Gan’s city architect), who approached me in 2003 with the idea to aim the professional spotlight at the contribution made in recent decades by women architects. The exhibition’s early version was aborted, partially because several of the would-be participators did not consider gender to be a central component of their work. It was only when Sergio and I decided to open the proverbial ranks – add architecture scholar Sigal Davidi as curator, who was then researching pre-1948 Israeli architecture; set up a diverse steering committee; and publish calls to the entire women architect public – that the exhibition started to gain momentum. For that, I thank the steering committee and the curators. Questions about the uniqueness and distinctiveness of women architects and architecture were not dealt independently from our agenda, but rather became guiding questions for the preparing team’s work.

The exhibition became only the starting point for various later activities under the banner of Women’s Presence in Israeli Architecture. It moved to Tel-Aviv’s University’s gallery (May-June 2007), was part of the “Woman” festival in Holon (March 2008), and became the genesis of many meetings, conventions and public discussions covered and debated in the Israeli press. These activities served to raise awareness, formulate the distinctive problems faced by women architects, and helped create an empowering professional network. One undeniable conclusion was that despite their many gains, women architects still must struggle to gain recognition of their skills, to plan bigger and more complex projects, and to expand and diversify their clientele.

Social science has taught us that different social power relations are interrelated, and so there must always be links between gender-based oppression and classist, ethnic, or national oppression. This catalogue features mostly hegemonic women architects: they are mostly Ashkenazi Jews, upper-middle class, who live in the wealthy greater Tel-Aviv area. Some have partnered with male architects, or come from a long family line of architects. They consequently enjoy class, ethnic, and national privileges unavailable to other women.

Feminist thinker Bell Hooks have dwelt at length on the intersection of class, racial, and sexist oppression of African-American women. She writes that white feminists who advocate for women’s liberation remain ignorant of their own privileges, and how these privileges affect their relations with black women who are outside their race and class. White middle-class women often view themselves as victims of oppression who must struggle to gain their liberation, but often do to at the expense of poorer working-class women, who are mostly black. They overlook their own responsibility in the oppression suffered by others.

In this vein I ask Israeli women architects to recognize their own class, ethnic, and national positions, as well as their gender identity. They must show solidarity and join struggles for liberation from various types of oppression which might not affect them directly.

At this historic moment, when the Women’s Presence catalogue is published and when their professional achievements are recognized, I call upon women architects to use their privileges and professional credentials not just for their personal advancement, but also to support women of marginalized groups, even when these might seem alien or unfamiliar. I ask them to have not just professional knowledge, but social sensibility and gender awareness as well, and to use these means to change Israeli society. After all, planning and architecture normally serve society’s strongest groups: market forces and government institutions. But these practices are also means of distributing society’s resources. Socially-aware women architects can penetrate the heart of the planning establishment and influence the way spatial resources are divided.

So which paths for action are available for women architects who wish to have both professional and social influence? Groundbreaking women architects are already working in a number of ways: they work to increase public participation in their projects; they plan for marginalized groups, and in their commissioned projects they make an effort to protect the interests of various groups, not just of their clients.

It must be admitted that many social aspects of planning are rooted in public policies and prerequisites for architectural planning, such as land use and rights. Many women architects, mostly those whose work focuses on architecture, only join the planning process after its key parameters have been set – that is, when social and planning decisions have become outline plans or blueprints. Thus, the gender-based division of labor in architecture also minimizes their ability to influence. But architects who are also social leaders have found ways to overcome this and other limitations by joining civil society organizations. Through activism, they initiate or support professional struggles for changed policies, the planning rights for marginalized groups, and the general good. 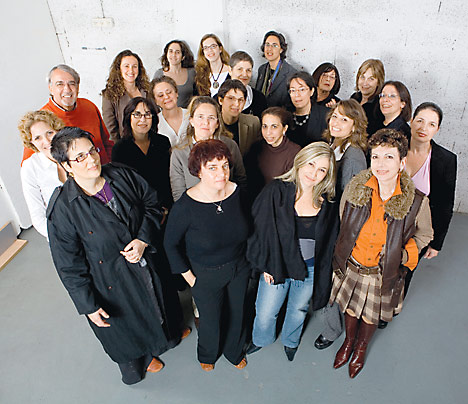 .
Back to Index
Next Writing
Previous Writing