The video artwork “Implementable Plans” depicts alternative planning initiatives by planners and residents of the Beit-Hanina neighborhood in northeast Jerusalem. It touches upon the severe housing shortage, the crumbling infrastructures, and the dire lack of open areas in the Palestinian neighborhoods. Arch. Efrat Cohen-Bar of the Bimkom organization, Arch. Ayala Ronel, and Eng. and Planner Nasser Abu-Leil discuss these and other initiatives, and suggest detailed ways of realizing them through what Ronel and Cohen-Bar call “Implementable plans.”

Municipal plans for these neighborhoods, from the late 1970’s through 2000, have allowed little-to-no development. Planning for public purposes was neglected, and most residents were forced to build their homes without obtaining the proper permits. Amendment 43 to the 1995 Planning and Building law allowed residents to organize for the first time. Individuals, families and civil groups were allowed to create planning initiatives of their own. The municipal authorities, however, enforced new limitations. Jerusalem’s new outline plan of 2009 only allowed planning in areas where it had been approved in the past. When it comes to new areas that were never previously approved, the authorities require submitting general plans as a prerequisite for specific or private planning. The existing neighborhoods are therefore barred de facto from expanding in to new areas, or even to areas informally built.

And yet, in recent years it seems that the planning authorities have become somewhat more accepting towards alternative planning initiatives submitted by residents. Arch. Efrat Cohen-Bar of the Bimkom organization and Arch. Ayala Ronel analyze several of these grassroots initiatives. They suggest detailed ways to realize them through what they term “dynamic planning” that produces “implementable plans.” Planner Nasser Abu-Leil describes how these principles are applied in Beit-Hanina and Shuafat.

The 9713 initiative for the El-Ashkaria area in southwestern Beit Hanina was the brainchild of one resident, Ramadan Bader, who decided to take action following the partial demolition of his home. He organized neighbors who were also dealing with pending demolition warrants, and asked the neighborhood authorities to aid their efforts to locate a suitable architect and see the planning procedure to a successful end. The initiative came into force in 2012. It spans 83 dunams, most of which open territory, and grants statutory permits to a residential area until then informally built. It regulates and retroactively sanctions the existing buildings, and allows for future expansion for both residential and public uses, without requiring the demolition of houses. The initiative even included checks and balances, complex planning procedure, and recompense tools to benefit all stakeholders.

From objections to planning 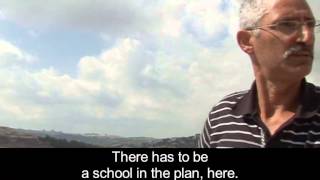 .
Back to Index
Next Video
Previous Video